As I mentioned before, we both love wearing the Vibram Five Fingers. And we still do in fact. But there was a real gotcha that I came across whilst on the GR5 which put the whole trip in jeopardy for a few days.

Ten days into the walk, I developed a spasm in my left calf that stopped me in my tracks. I’d worn the Five Fingers for five of the previous days but had stopped using them a few days before as I realised I was bruising my insole. 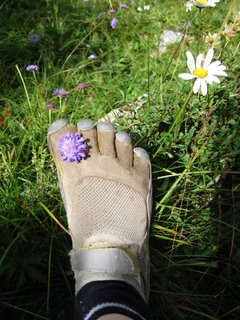 The bruise was caused by wearing the Five Fingers since my left arch arch collapses.

My right arch doesn’t collapse anymore – wearing Terrocs and Five Fingers seems to have strengthened it. It certainly used to collapse, I had to get the “Custom Fit” Superfeet insoles ten years ago. When I was re-assessed by a Superfeet Fitter last year (many years of trail-shoes and some time in Terrocs) I found my feet were hardly collapsing at all. So much for the strange idea that “once your arches collapse there’s nothing you can do about it” that I’ve heard and read several times. So much for Conventional Wisdom.

But my left arch still collapses. So as I took a step and my left foot happened to land with a small stone under the arch, I would initially feel nothing (the stone fitting into the arch).

However as soon as I weighted the foot and “stepped through” with my right leg, the arch would collapse, crushing the toe-flexing tendons of my left foot between the stone under the arch and the bones.

Obviously this made them quite painful. In fact, to my surprise, a visible bruise developed after five days of walking in the Five Fingers.
At that point I decided to swap back to the Terrocs for a few days. In fact I wouldn’t return to the Five Fingers for the rest of the trip. Though I carried them since I dearly wanted to go back to them if I felt I could!

However, because the toe flexors were painful the Soleus muscle in the calf tried to avoid moving them by tensing up (purely a sub-conscious reaction).

But of course I was moving them with each step, so the Soleus was trying harder and harder to stop them until eventually it went into spasm.

It was like getting severe cramp in my left calf whenever I tried to weight it.

Luckily, with three days of rest, and holding the leg in the freezing cold outflow from a pipe in a mountain stream for five minutes in every fifteen, it healed enough to allow me to hobble on. (As I mentioned before, the cold treatment caused great concern with many French people, until a pair of French Physiotherapists arrived! Beware the well-meaning advice of those who don’t actually know what they’re talking about… especially in the mountains. I might post a couple of observations on that one day – it’s an interesting area!). 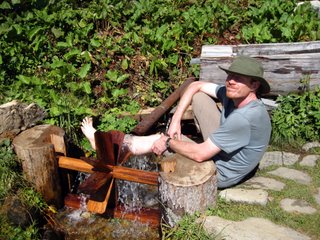 I was also given some anti-inflammatory cream (Srilane idrocilamide) and pain killers by some very kind French hikers in the La Balme hut (one was a doctor so asked me a couple of questions to ensure I wasn’t being given something that might kill me).

None the less, I didn’t take the pain killers since I didn’t want to mask what the leg was telling me and then further aggravate it. I also avoided using the cream until we hit Briançon a couple of weeks later where I was able to check out its contents on the Internet. The Srilane cream appeared to help but since it was generally healing anyway it’s hard to be sure. But at that stage I was confident I wasn’t re-injuring it and just wanted to keep it calm enough to complete the walk.

It then continued to improve as we walked, with only one extra rest-day in the old town in Briançon when it whinged a little, which was certainly no hardship. And by the end of the walk I could do 25+ kilometres (16+ miles) days without feeling a thing. Further proving that it was the above situation causing the problem (i.e. since I’d stopped wearing them – it improved despite continuing to walk on the leg).

Would I wear Five Fingers on a Big Walk again? Absolutely.

I wore them for five days and they were very comfortable, collapsing left-arch issues aside. Importantly, my right foot was fine and LB’s feet were fine whilst she continued to swap between hers and the Terrocs (wearing the Five Fingers for around 30 percent of the trip in total).

The only reason I had a problem was that, after years of wearing “normal” footwear, my left foot is not yet strong enough. Once it is – comfy long distance hiking joy awaits…

As I wear the Five Fingers more I expect that the arch will strengthen and cease collapsing. Meaning that I can wear them, or perhaps the new KSO Treks, on the next Big Walk.