The volcano that sits beneath the Eyjafjallajökull (glacier) has started to erupt.

Which  is interesting since it appears that it’s emanating from Fimmvörðuháls; the col that we crossed on the last day of the Iceland walk (pictured above).

Apparently the “What to do if there’s an eruption” signs were well worth reading after all.

There’s a good picture and balanced article on Al Jazeera and not bad reporting but pretty poor picture on the Times Online.

Others are more sensationalist of course and no better pictures that we could find for the moment.

The fact that it’s coming from the col rather than actually beneath the Eyjafjallajökull is good news for Iceland since it’s less likely to cause massive flooding.

Of course it’s very early days, but at the moment it would seem likely that the route to extend the walk past Þórsmörk (Thorsmork) to link to Skógafoss on the coast may be out of action for a while.

Still, if the dreadful, derelict old hut near the col is destroyed that will be no great loss! I just hope the new one survives… 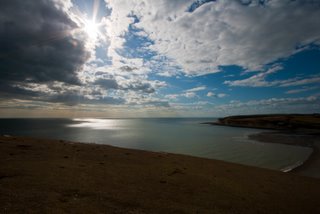 Probably BackBlaze. Although I prefer CrashPlan’s interface, I prefer BackBlaze’s use of a large, trusted datacenter.
END_OF_DOCUMENT_TOKEN_TO_BE_REPLACED