My brother once said “You have girl feet!”

He wasn’t referring to the size of them (most girls don’t take an 11.5UK) but the general lack of smell.

Most of the time it’s true. They do remain reasonably pong-free when compared to other people’s feet under the same conditions. Nothing in the laboratory you understand, just things like being on the hill for a while.

However, wearing shoes without socks is a recipe for disaster even for my feet. And the same goes for Five Fingers.

During the colder weather I’ve taken to wearing them with socks. Also last summer on the GR5 the socks were an attempt to give us a washable layer to prevent the hum.

But as the summer comes, I’m tempted by the ease of sockless Five Finger wearing. It’s easier taking them off when I reach the client site and swapping into them if I step out at lunch and yet again at the end of the day.

Which is certainly not the most sociable thing to have in an office environment. 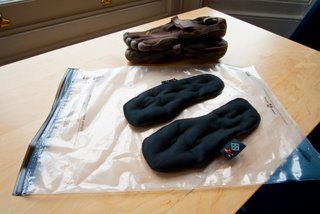 So, I’ve come up with a solution that not only keeps me from getting too unpopular but also means I should have dry Five Fingers to slip into.

A 32X50CM (12.5X20 inch) OPSak (“Odour Proof Sack”) purchased from Top Of The Range and a pair of Dampire Dryzone Shoe Dryers to dry them out whilst they’re safely encased in the pong-proof plastic (which apparently is used for other bio-hazardous material as well).

That should keep everyone happy, especially my feet since they get to walk about in the Five Fingers as often as possible.