This post is simply my recipe for publishing a book via Lulu although a lot of it may be relevant for anyone wanting to write up and format a book.

Though to be frank, I’ve had a lot of trouble getting the images printed correctly. With a lot of help from Lulu support we finally got good copies last week. Hence the delay in posting about the  GR5 Honeymoon ebook.

Next time (and there may be a next time!) I think I’d use Blurb since they review well for image printing. I may still use an uploaded PDF with Blurb rather than using their (admittedly very good) downloadable book creation tool since I think I’ll want more control over how it hangs together (plus I believe you don’t get much choice as to the style of cover with that tool – though I may be wrong!).

There is a wealth of instructional material on the Lulu site. But because there are a great many different options, I thought a very specific path through it all might be helpful to someone.

Besides – I wrote all this out as I went along so it seems a shame to waste it!

Recipe for publishing a book via Lulu: END_OF_DOCUMENT_TOKEN_TO_BE_REPLACED 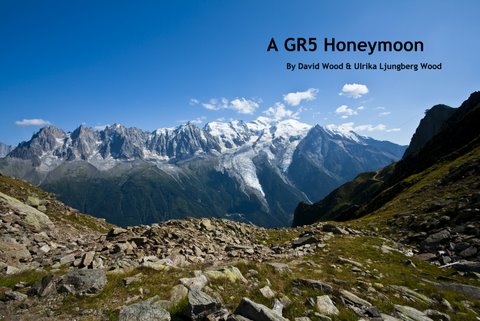 As we walked the GR5 we made diaries, audio for me, written for LB. “LB” being a nickname, like “Red Yeti”. Some may be surprised by her actual name. Some who know us have been mighty confused by the “LB” mentioned on this blog!

So, assuming you don’t want to spend silly-money on a real, harback book about our honeymoon, take a look at the:

Free ebook version (you need to register to download) of A GR5 Honeymoon.

Unfortunately the ebook version doesn’t come with the cover that’s on the real book – but that’s at the top of this post – just click the image and you’ll get the idea.

The first Big Walk we did together in the Polish/Slovak Tatra has now faded somewhat in detail with only the pictures, a single, rather retrospective blog entry and the odd good yarn that has been told and re-told to friends to remind us. We didn’t want the GR5, or in fact any other Big Walk in future, to fade so much.

I wasn’t sure that I would remember to make an audio diary every day but with the lack of other distractions I managed it almost without fail.

We then transcribed it ourselves, partly as a way of making it more accessible in future to look back on and partly to add the details that we didn’t think to mention in the original as we went.

And then the project grew…

We added LB’s written diary into the transcription, organised it into a semi-formatted document (using Google Docs which allowed us to both be editing and adding to the same document at the same moment).

We then decided it was very, very “dry” without some photos so they started to come in.

And eventually, we had something not far short of a book. So we decided to go that last mile and create one. Just for us, with a copy for each of our respective parents.

It was completed last November, a couple of months after we returned, but we had quite some trouble getting the images to print correctly.

At last it’s time to “publish” it to the world.

Not that I expect anyone to read it all! But it might be of interest to flick through.

I certainly don’t expect anyone to buy a copy. Particularly since it’s rather expensive. The price that you see is purely the price that the Lulu charges to print, there’s no profit margin on there for me.

But considering it’s around 260 pages with a photos on most of them, and it’s wrapped in a glossy, full colour cover and printed exactly to order – it’s not badly priced at all.