Hendrik Morkel has posted a great review of the FiveFingers. Within the comments, there was a link posted by harttj to the posting in which I mentioned that I’d injured myself as a result of wearing them on very stony ground, with a pack, when my feet were still quite weak.

I just want to be clear about my thinking about this: FiveFingers are very, very good for your feet. Apart from being the most comfortable footwear ever invented, they strengthen your feet and allow them to attain the power and flexibility that they have evolved to have. That power and flexibility is almost certainly not present if you have been wearing “normal” footwear for most of your life.

I really do find that I have far more “muscular” and flexible feet. It’s not over-stating this to say that my feet now feel like extra limbs that I’ve never previously had. I now have something that’s slightly more akin to hands on the end of my legs as opposed to things more akin to hooves which I used to clomp about on. I’m quite serious about this.

Okay, so are FiveFingers “dangerous”? Of course not! But using them for a hard walk across stony ground whilst carrying a quite heavy pack (including food, water and way too much photographic kit!) is dangerous if you do it before you are strong enough to do so.

I’d note again that my right foot was just fine and it had gone through the same conditions (of course!). And that the injury healed as I walked the 550kms+ onwards to Nice. So it wasn’t very damaged, just sore.

I had no arches before all this. I wore custom insoles and had sore arches and knee pain. I have neither now. It was visible in wet footprints on dry boards – my arches used to be in contact with the floor on both sides!

But this summer LB noticed I formed a normal footprint on both sides. And walking through soft peat in the FiveFingers clearly showed a full arch on my right and a more shallow but definitely present arch on my left.

My feet are becoming the biomechanically impressive limbs they always had the potential to be, had I not worn “good, solid, supportive” footwear all my life.

But how do you make your feet strong enough to take such a pounding? 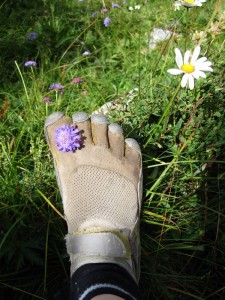 Once we swapped to inov8 Terrocs not only I, but LB and also our regular walking and Big Walk buddy Kev found that our feet were tired in a way that indicated they were working in ways they’d just not been used to. The more “muscular” nature of my feet, I’m sure, started with the Terrocs but was mainly achieved by wearing the FiveFingers.

Will wearing inov8s/FiveFingers sort out your knee/foot problems and give you muscly feet in a couple of weeks? Of course not! That’s exactly like expecting that a couple of sessions at the gym will give you a six pack (many magazines and web sites are sold on such rubbish of course). But the advantage of wearing inov8s/FiveFingers is that it’s something that you don’t take time out to do, doesn’t take extra will-power and is actually fun (sorry, but gyms just aren’t fun to me).

So, if you don’t get along with inov8s for some reason, at least try something very, very flexible indeed to allow the feet to work harder whilst cushioning the poor, slightly atrophied things and preventing injuring them.

Several of the well known walking shoe manufacturers are bringing out “barefoot” models next season (according to Outdoor Retailer 2010 coverage by backpackinglight.com – sorry members only link). I am very, very happy that it’s catching on but I must admit to being rather concerned that many people may put on a pair and expect miraculous transformations in existing injuries and lower limb health. Whereas if they just start walking long distances with large packs, they may acquire more injuries and worse lower limb health. Which may consign the idea of “barefooting” to the list of fads that come and go. It’s all about expectations and whether people will generally understand that they need to rebuild strength in their feet slowly.

On a related note; not only does wearing the FiveFingers strengthen your feet, it changes your gait. I had no pain at all from my knees on the Corsica trip until I started to descend on an easy track (as we joined the Mare-Mare Sud for a diversion in fact). I realised I was was heal striking in descent because the inov8s have a soft heal. But I know for sure that in the FiveFingers I would have switched to toe-striking with smaller steps. So I consciously switched gaits (surprisingly hard to do after years of shoe wearing I can tell you!) and the pain stopped in a couple of steps. Back to heal striking and the pain returned, back to toe striking and it went. Very interesting.

We didn’t wear the FiveFingers on the GR 20 for the simple reason that we assumed the route would be very, very rocky and we weren’t sure our feet were strong enough to cope yet. We also wanted light packs so they were literally tossed out of the bag as the cab arrived to start the journey. It was a knife-edge decision.

But Russ from this year’s Big Walk crew met someone who had walked GR 20 in them. He said he had hiked in them for two years before he was strong enough to wear them for a route like the GR 20.

Bottom line: We both wear FiveFingers almost constantly when it’s not snowing. For everything. Home and hiking. They are not just comfortable, they make walking even more fun. They and the inov8s have allowed me to correct knee and foot problems. Lets face it – 3.5 million years of bipedalism can’t be wrong!

9 Replies to “FiveFingers Are Good For Your Feet!”