Although I’ve mentioned these before, I think they’re so good they’re worth their own posting. I always carry my phones in an A6 Ortlieb 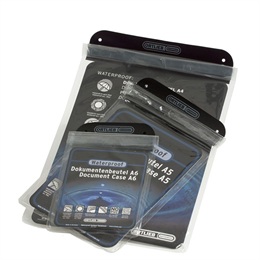 Document Case. On longer trips I also carry a second one for the iPhone Nano, cash and passport.

The really big advantage with them is that you can use the phone whilst it’s inside (even iPhones) and it remains dry. So you can use it in an emergency in the pouring rain.

As an even bigger bonus, the wind noise that can utterly obliterate your voice is all-but removed by keeping it in the bag. Meaning that if you record audio notes or an audio diary,  you can do so wherever you like. But more importantly, if you need to make an emergency call, they’ll actually be able to hear you at the other end!

Phones are rather water sensitive. Over the years I’ve seen many die on the hill (more than ten I’d guess) where people had them in the pocket of a waterproof coat. Pockets simply aren’t reliable for keeping things dry if you’re out in really heavy rain for an extended period.

The cases also last a long time. I think the one I’ve just retired is over ten years old and has been out with me for every single trip during that time, including the seven weeks of the GR5 and three weeks of the GR20.

It’s so old that it has a different “Ortlieb” logo, and I’ve had to use a little McNett Seam Grip to stick down the Velcro that had just started to lift after about eight years. But it really is one of the most reliable and essential bits of kit I carry.