Okay so this is many years behind several million other people, and speaking as an IT consultant I hang my head in shame, but; I think I finally ‘get’ Twitter.

Before I explain it I need to take a moment to explain what a blog is. “Hang on!”, you’re probably thinking. “He was talking Twitter and now he’s off onto blogs. What is this? Where’s all the hiking and kit and techniques?” – Bear with me – I’ll come back around to that.

I need to explain blogging since I’ve met more than one otherwise web-savvy person who didn’t know: blog is a contraction of “web log” which is a rather fancy name for a diary that you keep on the Internet. To write a blog, you use “blogging software” which is just a program that runs on a computer on the Internet that makes it easy to create a new web page, known as a “post”, with a title and a date, to which you can then add your ramblings about whatever you have been doing or are thinking of doing. That’s all there is to it.

But like many inventions, the use it’s generally put to isn’t really the original use that was intended. What I mean is; you are reading this posting that I wrote on some blogging software right now. Notice that it has a date at the top. But this site isn’t really much of an online diary. Like many other people I’ve been using blogging software to publish a series of articles on a particular subject (and this post will get back there, however tenuously).

So that’s what a blog is, but Twitter is what is termed a “micro blog”: some blogging software that only lets you “post” very short entries. Forcing you to boil down those little moments in your life to pithy evocative phrases (hence haiku is quite a popular form on Twitter). The little posts are known as “Tweets”.

So I can now read back over my postings from Corsica as we walked the GR20 (bet you can see the link to the main topic of the blog coming…). I love it, a little diary of moments in my life. 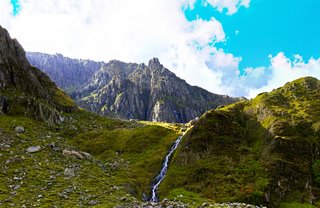 But just like ordinary blogging, Twitter has grown way beyond that. People use it to see what their friends are doing since you can see their Twitter pages (their “micro blogs”). But to make things easier, and stop you having to hop about to read all your friends’ pages, you can have their Tweets appear directly on your page. That’s called “following” someone. So you see your own diary mixed in with the diaries of your friends.

There are other aspects that have grown such as using the @ symbol to direct your Tweets at other specific Twitter users (read it as “at” as in “I’m directing this tweet ‘at’ RedYeti”) but such things are way beyond the scope of this posting!

What is also very handy is that you can post your tweets by text message from your phone, instead of logging in to Twitter in a web browser on your computer. Which is almost certainly cheaper than using the data connection when abroad. (Side note; all UK providers have some cheap option for data roaming if you just ask them! Edit Feb 2013: Except for “3” at the time of writing).

Which means that if you have close friends and relatives that want to hear what you are doing on a trip, you can simply send them all a link to your Twitter page and tell them all with one text. Better still, if they sign up for a Twitter account (they don’t have to post any Tweets!) they can “follow” you, and then they can tell Twitter to send your tweets directly to their own phone. So you can effectively use Twitter as a way to send one text message to many people (and get a mini diary into the bargain).

So, to finally blunder back on topic; I’ll be tweeting my way around the Tour of the Jungfrau Region if you fancy seeing what we’re up to!

We’ll also be using the (new, lighter) Spot tracker so you can see where we are, pretty much real time: