We each picked up a pair of Vibram Five Fingers at the OS Outdoors Show this year. They are fantastic.

We’ve hardly taken them off. In fact I considered getting married in them.

Rachel, our regular walking buddy and Physiotherapist, also got a pair and wears them to work all the time. She gets cold feet (in fact she has proper Reynaud’s Syndrome – a scary thing that) so she’s far more comfy with a pair of toe-socks inside them. In fact at times she even finds them a bit on the warm side during the summer.

The toe-socks also mean that they need washing far less often. Without them the Five Fingers can get a bit pongy after a couple of days.

The feeling of something between your toes was something I wasn’t sure that I’d get used to but after the first hour I’ve never been aware of it.

It’s not quite like walking bare foot in the sense that you don’t have to be quite so careful where you tread when wearing them. I walk along quite “naturally”, as if wearing shoes. You also notice odd things, like tarmac actually feels softer to walk on than concrete.

I’ve been wearing them for the 2k each way walk to work on which LB usually comes along and we’ve both found that at first we got sore heels. A mixture of slightly “warm” spots as if they were about to blister and also a sort of “impact” related tenderness.

We swapped back to the Terrocs for a few days now and then to let the soreness subside. Our feet have simply become tougher and now cope without a problem – even for running short distances (possibly longer distances – we’ve not tried!).

Toughening up the skin like that is probably an advantage on a long walk but of course the big advantage is the better proprioception and strength.

The oddest thing was when I came to take my Terrocs off one lunch time on the hill. I massaged my feet and found to my surprise that they felt far, far more “muscly” than they used to. My feet just feel stronger. 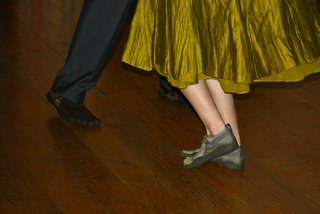 In fact, we’ve found them so comfortable that we’ve decided to take them with us on the GR5. We think they’re going to be worth the 386grams for my EU45 and the 248grams for LB’s EU36.

Although we decided to go with the conventional footwear for the actual ceremony, for the party afterwards, as you can see from the picture my brother took, we both decided to change into something more comfortable! 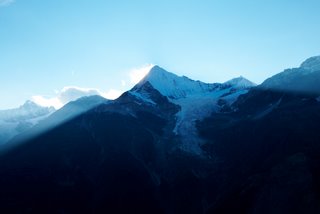 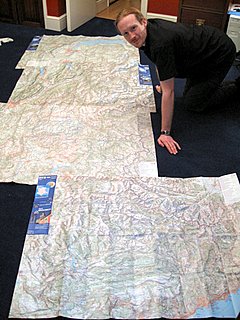 Stretching to breaking point my excuse that “I will be carrying it for seven weeks so I’ll get whatever kit is necessary”, I’ve decided to have the legendary pole-hood of the TN Laser Competition re-worked in Cuben Fibre by Morph over at Team IO. 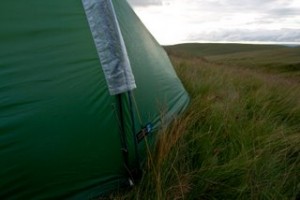 To me, the original hood is at odds with the rest of the cleanly designed Comp’ in being rather over-specified. For instance it’s only about 14cms (less than 6 inches) wide and yet it’s got a taped seam running down the full length of it.

I know that TN say that it’s “optional” but it’s only optional if you don’t mind doing without the full strength, waterproofing and anchor points of the tent.

And although you could leave it at home for an overnight trip during good weather, in the UK mountains with our very changeable maritime climate that’s unlikely to be a very sure bet. And as for predicting whether I’ll need it across seven weeks, even in the more stable continental climate of the French Alps…

So, I want the things that a pole-hood gives me on the Comp’; two extra guy lines, waterproofing on the central seam and some stability provided by the compression of the pole.

But I don’t like the weight. What are the options?

No pole hood or guy lines:

No good. I want the guy-lines for stability, the compression strength of the curved pole and waterproofing.

Though of course I could use silicone seam sealer. Which adds to the weight somewhat.

There are three tie-outs that the pole-hood attaches to along the pole. But just using two of them for attaching the guys won’t work since the tie-outs simply aren’t designed to be strong enough.

The pole-hood is designed so that one guy line pulls on all three tie-outs and, when in tension, also against the guy on the other side, compressing the hoop formed by the pole.

Still no waterproofing with this option.

Guy lines linked with a length of cord

What about taking the cords from the edges of the pole-hood and linking the two guys, as well as the points where the pole-hood attaches at the pole ends and attaching the guys to them?

Well the cord would simply try to take the straightest line between the three attachment points on the tent thereby not providing any real transfer of the load I don’t think. Also, there’d be no compressing force applied to the pole and obviously no waterproofing. 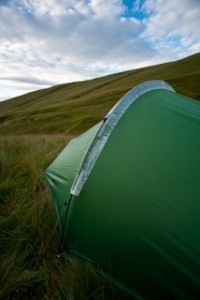 To improve on the last idea, link the two cords taken from the pole-hood with lateral cords running across the pole.

Meaning the cords stay in roughly the sample place as they were when threaded through the edge of the pole-hood and give compression to the pole.

Well it’s almost there I think. But you’d end up with a great big mess of cords that would be a nightmare to untangle and pitch each time. And you’d still have to add the weight of the seam seal to provide the waterproofing. 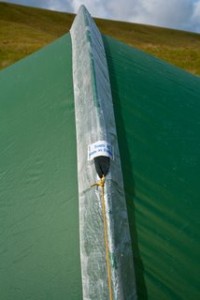 So, without serious re-working of the structure of the tent itself, or perhaps compromising the strength, it has to have the pole-hood.

But why does it have to be so heavy?

I asked Wayne if he could remake it and sure enough he’s taken it from 73 grams (with original cords) to 33 grams (with new cords) for just the hood on its own. Add in the guys and my scales make it 84 grams originally and now 44 grams total weight.

I’d guess the new cords alone must weigh around 8 grams and as explained above, I don’t think they’re expendable. Factor in what has to be another 8 or more grams of silicone and carrying the actual “hood” part amounts to the equivalent of a piffling 17 or so grams.

For £30 it obviously adds a bit to the cost of the tent. However it also takes off about 4% of the original weight and a 4% weight saving can’t be bad!

You can see from the pictures that it’s beautifully made. Amazing work, welding the material together and running the cords through the edges like that.

I reckon it’s at least as tough as the original. I’m looking forward to trying it out in the Alps…