I must admit I wasn’t sure that the Terrocs would be up to the whole walk. I’d already talked to Outside Hathersage about getting some sent out to us if we needed them. But in the event, they did the whole 732KM without a problem.

Well  okay the Five Fingers did five days of duty, but the Terrocs were also out on several walking weekends before we left so I reckon they can claim the full mileage.

They’ll be around for a few more trips yet by the look of them. Since we’ve return I’ve put a couple of spots of McNett Seam Grip on each one where the stitching has become frayed but apart from that, they did the job nicely.

The one thing that let them down was that the right shoe has a rather fat seam right where my longest toe is (my second toe). But that was easily solved with a bit of wool stuffed into it. It “felted” to form a comfortable pad that I dutifully put back in place, every time I put them on, for about six weeks.

I was very lucky that Rachel was carrying some (that she never used – amazingly!). She’d bought it very cheaply from Boots (a chemist – not a shoe shop) in the UK. But I know that there’s a firm called hapihike that do a more expensive version, available online. I certainly plan to carry a small wad of wool in my first aid kit from now on.

Would I take Terrocs again? Only if I can’t find an even lighter, comfier shoe in the mean time! 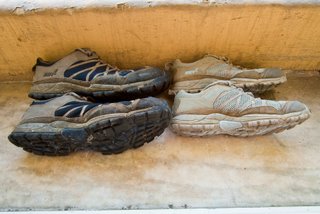 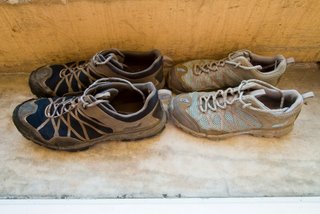 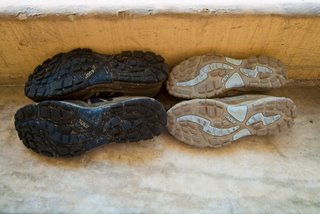