We’ve been having a bit of a think.

All things considered, we really won’t want to stay in huts for the whole trip.

And, we won’t want to come home at the end of it.

So as a solution, we’ve decided to take a tent and to stay for seven weeks!

The decision to go from five to six weeks took quite some discussion and planning and weighing up of variables.

The decision to go from six to seven weeks was more along the lines of “Oh… b**ks to it! Why not?”

We’re both freelance and don’t have any more ties than a mortgage at the moment. Not even cats to milk or goldfish to shave.

We’ve been looking at what we might do as Variantes along the way.

The Vanoise National Park looks particularly good and was on the list of potential Big Walks already. We’re thinking about going down through it, back up, and down again all on different routes!

But at our proposed pace, that would put the trip beyond seven weeks without any rest days. Though if we stick to the days in Paddy’s guide it would actually fit… it all depends on how much we speed up…

Enough of all the waffle – what about the main raison d’être for this blog; the kit?

We’d been itching to camp but the thought of lugging camping kit around when we plan to stay in huts for most of the trip had put us off.

But this isn’t 1975. We don’t have to carry a canvas ridge tent and wooden stakes.

So I made up the list of what we’d need to carry:

For a whisker over 3.3 kilos, including fuel, we can go from whatever our base pack-weight for hut-to-hut will be, to being able to heat water and sleep in a bag on a comfy mat in a tent. It’s a no-brainer. 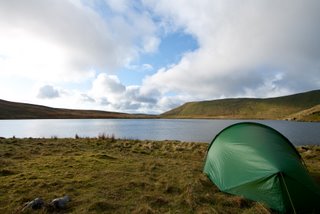 The more knowledgeable might spot that a tent rated as “1+” by the manufacturer is being used by two people.

Well with LB being on the petite side and despite me being 6’2″ (187cm) ish I’m not exactly carrying any extra poundage, we can “snuggle” quite nicely into the Laser Comp‘.

The porch is surprisingly generous. There’s at least as much as in the Voyager Superlite taking into account the fact that with the Voyager you have to traverse the length of the porch to get in and out and therefore can’t really use a lot of it as storage. With the vertical room it’s quite suitable for cooking under as well.

We’ve tried it for a weekend of camp-site camping and for three days on the hill in some pretty nasty weather on a couple of exposed sites.

We’ve found that we can adapt our usual routine quite easily and the extra 900 grams knocked off the pack-weight is well worth any extra faff.

And to justify all this spending on new kit, we only have to avoid staying in a few huts over the trip and it’s paid for itself!

21 Replies to “GR5: Changes To The Itinerary And A TN Laser Comp For Two”