This posting is an assortment of “handy tips” for longer trips although some apply regardless of length.

A lot of home insurance policies only cover you for thirty days away from home and won’t extend (and no it doesn’t count if someone comes to stay – I checked). So check when you’re renewing and don’t believe them if they tell you “Oh but no one does longer than thirty days” as my last insurance company actually did.

My mobile phone was also only insured for up to 30 days outside UK but it’s now covered on house insurance for longer.

What To Do With The Car

Edit 09 March 2011: In the UK, the newly finalised Continuous Insurance Enforcement law mean that unless you have officially declared your car as being off the road (using a SORN), you will probably be fined unless your car is insured continuously, even if you aren’t using it! Also beware, I have been told that although “SORNing” a vehicle is relatively easy, getting it taxed again afterwards can be a lot of bother…

Car parking is no problem if you have your own drive or if you have someone to look after the car whilst you’re gone. But the road that I usually park in has had the cars towed-away during each of the previous summers (drain repairs, road resurfacing etc.) so I was considering using ParkAtMyHouse.com.

But eventually I left it near my brother’s place and he kept an eye on it. However, I created a new GMail account especially for the car and posted a tiny, tiny printed note under the tax disk in the windscreen that read “Want to contact the owner? : yourspecialaccountname@gmail.com“. After a month, someone emailed to ask when it was going to be moved. Since I’d set the account to forward to my brother, he got the email, moved the car and no-one got too grumpy. 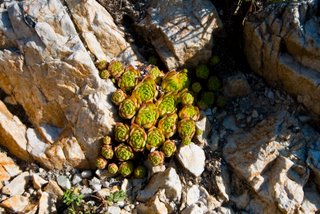 We print-off a check-list of things like “Empty Fridge” “Empty Bins” “Empty Kettle” “Turn Off Water” and cross them off with a marker pen just before we go. It’s relaxing to be able to run through the list and not leave the house with the nagging feeling that you might have forgotten to do something.

Charging cameras and other things I’ve covered under the videocast but it’s worth repeating that you need to ensure whatever charger you use will charge the item from when it is utterly flat.

Make sure the clock on your camera is set correctly, and synchronise it with whoever you’re walking with so that any amalgamation of your photos will come out in the right order. (If you do get them out of whack, like I did a few days in to the trip, then both Picasa and Lightroom can fix it without re-compressing your images).

I’d never use the “timezone” feature that some cameras are now providing. It’s not a standard EXIF field and so will be treated differently by different software, or more likely just plain ignored. 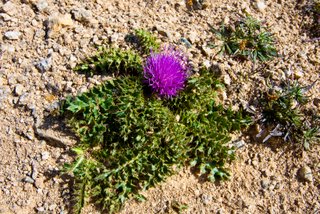 Try to build-in rest days to allow for such things as minor injuries and illnesses but mainly to allow you to stop somewhere that you think is wonderful and really soak up the atmosphere.

This might sound odd, but try taking smaller steps than you might naturally do when you’re faced with a long climb. I found that by consciously slowing down I could go far further and be less tired. Someone we walked with for a few days who was a very experienced long distance walker agreed wholeheartedly. Of course, after a few weeks, it doesn’t matter; you can bound along.

Stretch! And massage your calves and quad’s too. I only learnt last year that you need to stretch your calves with a bent knee and also with a straight knee so that you stretch both the Soleus (when bent) and the Gastroc’s (when… straight…).

Take a picture of weather forecasts and also of any noted-down email addresses of the people that you meet. After a few days of “zoning out” on a hike, it’s far too easy to forget important details or to lose small bits of paper. “Now… when did they say that lightning was coming? Today… or tomorrow?”

We always tried to keep one evening meal and one breakfast with us which worked out very well when we turned up to find that the only refuge for miles was closed!

A 10 gram mini-spatula made by GSI (they make those screw-together wine glasses) was perfect for scraping the soup of the bottom of the pan – you can’t do that with a spork!

We wanted to eat some tinned fish as a break from the cheese and dried sausage that was our usual lunch-time fare so we took an OPSak (Odour-Proof sack) to store the empty tins along with some tiny, thin bags to wrap them in until we could get rid of them. Which was sometimes three days – hence the thin bags; to allow them to be disposed of as cleanly as possible.

Most of the time I trust the water but not always. In fact, the times that you’re wondering whether you can trust the water are inevitably the times when you have little choice. So the Aquamira (or AquaVenture as it now seems to be called) came in very handy in allowing us to drink otherwise marginal sources. Over the seven weeks we used much more than I expected and I was glad I brought a new pair of bottles with me.

We never did need to use the special gas adapter since we found a standard, British/US style screw-thread canister that lasted us for the whole trip. 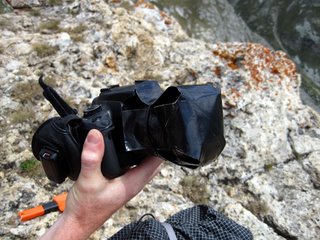 I took four metres of Gaffer Tape but used every last inch. We weren’t the only ones to find that it ran out on such a long trip. What’s more, I have almost never used it in the past so it surprised me what uses I found. For instance, I lost a lens cap and had to make one out of Gaffer and shock-cord. I not only carry Gaffer for repair but it also forms part of my first aid kit (for slings or holding splints) so being without it isn’t good at all. In retrospect I should have taken around six metres instead of four. Which wouldn’t have added much weight.

I always carry a tiny tube of McNett SilFix if we’re using the tent, but this time I also carried a tube of ordinary McNett Seam Grip and certainly used that. It’s such phenomenally strong and sticky stuff that it’s well worth the few grams. I gaffer taped over the sharp corners of the tube to stop them damaging other things in the bag. 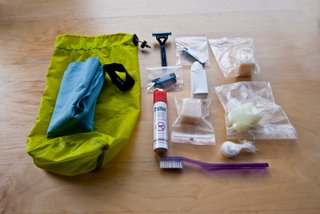 I didn’t shave often during the trip but by getting a bag of cheap disposable swivel headed razors I managed to keep my shaving kit down to 14 grams. I simply took the handles off three of them and changed heads (I have a feeling Lighthiker might have thought of that already but can’t find it on his blog…). However, I’d do this differently now (and I did, at Xmas to ensure it worked): I’d just get some high quality, three bladed razor heads and simply shave with them without the handle. Try it, it works fine. The advantage is that the more expensive head lasts far longer than the single multi-day-growth shave that the cheap blades managed (sometimes they couldn’t even manage that without hacking my face to bits).

We took 60ml Nalgene bottles of shampoo and by staying in a very occasional hotel we managed to get it to last the whole trip. Of course we only washed our hair with shampoo every few days but even with the amount of hair I have (remember the name of the blog?) that was absolutely no problem.

We also only took a couple of tiny bars of soap each. Actually it was one large bar of pure soap, cut into six pieces with each of us taking two of those. But again, the little bars of soap provided by the hotels meant that we actually came back without using one of those two pieces. 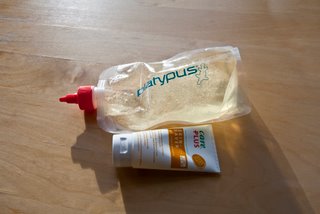 We hate normal sunblock. We only like to use the alcohol based variety which can be very hard to get hold of. Since we both have definite Northern European complexions we burn easily and require a lot of block. So… we simply bought several tubes and decanted them into a Platy Bottle. With the Firelite Spout it went on really nicely. (Sorry, BPL don’t stock them any longer, probably because they sometimes leaked when used with meths in a Platybottle but it worked fine with the gel). We didn’t use it all so it should last us for some trips this summer too – but it’s worth knowing that it only lasts two or three years apparently.

We hate shopping so we made up a Tesco delivery order for the morning after we returned. You can’t actually place an order long enough in advance to have it arrive seven weeks later so we changed our password and asked a reliable friend to push the delivery date forward until it hit the spot that we wanted.

3 Replies to “GR5: Some Tips On Walking Trips”